A KOTOBUKIYA Japanese import! You’ve never seen your favorite horror movie icons like this!  Kotobukiya brings a bold new direction to their popular series of Bishoujo Statues with the Freddy vs. Jason series, and up first based on a new character interpretation by master illustrator Shunya Yamashita is FREDDY KRUEGER!  Since 1984, Freddy has been scaring people in the Nightmare on Elm Street films as a razor-gloved killer who terrorizes his victims in their dreams, and in 2003 he crossed over with Mr.  Voorhees of the Friday the 13th series in Freddy vs. Jason.  This new Freddy may wear the same iconic striped sweater, hat, and bladed glove, but that’s where the similarities end.  A blonde vixen, this Krueger is a beauty with torn clothing, mismatched stockings, and even lacy undergarments peeking out from under her sweater!  Freddy leans forward seductively, one hand on her hip and her iconic glove raised next to her face.  Whether in your dreams or your nightmares, this Bishoujo statue is sure to make a big impression with her great looks and blood pool base.  Sculpted by Takaboku Busujima (Busujimax), Freddy stands just over 7 inches tall (1/7 scale) making for a screamingly cool display on her own, and she looks even better with the upcoming matching Jason Bishoujo! 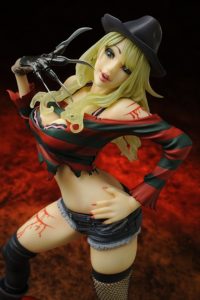 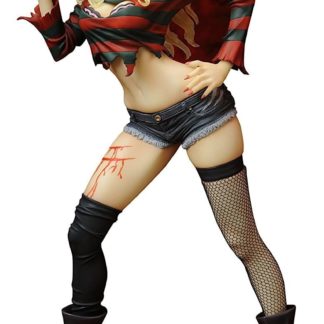