View basket “Jumanji Mini Prop Replica Electronic Board” has been added to your basket.

This retro board game is based on the Star Wars the Empire Strikes Back Ice Planet Hoth game by Kenner, released in 1980. Attention Star Wars fans and collectors! The Star Wars Hoth Ice Planet Adventure board game comes with an exclusive Luke Skywalker (Snowspeeder) figure. Win battles against 4 Imperial enemies: Stormtrooper, Probot, AT-AT, and Boba Fett. Earn enough Force to defeat the final foe, Darth Vader to win the game. Move around the gameboard using one of the 4 Millennium Falcon tokens, or use the Snowspeeder token. The retro Star Wars game makes a great gift for Star Wars fans and collectors of Star Wars memorabilia; This board game is for ages 8 and up, for 2-4 players 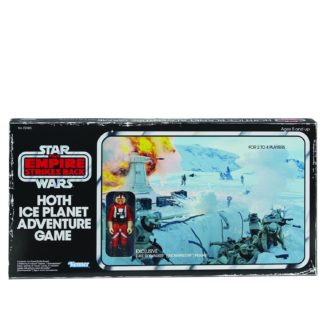