DC COMICS
Since her first appearance in 1992, Harley Quinn has captured the hearts of both fans and comics artists alike. The HARLEY QUINN RED, WHITE & BLACK collection of statues are based on various depictions of Harley re-created in vivid 3-D detail.This latest statue in the series comes from famed artist John Timms.
Harley Quinn has come into possession of Batman’s cowl, cape and utility belt. While there’s surely a great story about how she got it, what’s more intriguing is what mischievous adventures she can undertake while beneath the cowl. Will she frame the Batman in a crime spree? Or auction off these missing goods to the highest bidder? Whatever choice she makes, it’s a good guess she’ll be smiling when she does it.
•  Limited to 5,000 pieces and individually numbered
•  Figures measure 7.28″ tall 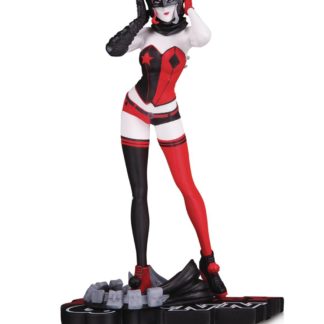